The small town of Searchmont takes it's name in honor of Mr. T. C. Search. He was from Philadelphia and was the treasurer of the consolidated Lake Superior Company.

Mr. and Mrs. Autio were the first immigrants to come to this country. In 1920 they moved to Wabos and opened a Finnish Co-op store in their home. Mrs. Hulda Autio was the manager of the store and it remained in operation until late 1932.

Mrs. Hulda Autio was also the postal clerk and station agent from 1927 until the small ACR station was abandoned in 1952. Mr. Andy Audio took over as postal clerk until his death in 1963. Shortly after that their daughter Astrid Koski took over.

The immigrants that came here farmed as well as cut pulp wood for the Algoma Pulp and Paper Company.

The name Wabos originated from a native word meaning "rabbit".

In the year 1914 the population of Searchmont was about 500 and there were big plans for this community.

The community of Searchmont has seen many mills over the years. Algoma Commercial Company operated lumber camps and a sawmill from 1899 to 1902. The mill was located at the end of the Hult Road. Several men, John Search, Harrisburg, Talbot, J.R. Mead and Francis H Clergue all from the U.S.A formed the company. The men wanted to utilize every type of wood in the region, charcoal - hardwood, spruce-pulp and paper, pine for lumber. After the trees were cut and the land cleared, they had planned to bring in settlers to build and till the soil. This plan never happened because the partnership was resolved. The company had no money to pay the lumberjacks so the men started a riot. The Ontario Government stepped in and the men's wages were paid.

Later that year Clergue formed the Lake Superior Pulp and Paper Company. Clergue asked his foreman John Gaudette to locate a site for the construction of the new mill. John Gaudette along with a government scaler H. Huckson picked a location below the ACR bridge (built by Clergue) where the water wasn't as swift so the logs could be held. After they had discussed it with Clergue he disagreed with their advice and built the mill above the bridge. The mill was built in 1903 and the ACR ran a spur into the mill. The company was showing large profits so Clergue sold it to the Spanish River Paper Company. They in turn soil it to the Abitibi Pulp and Paper Company.

Abitibi dismantled the machinery and it was taken to Sault Ste Marie where it was re-assembled on a tract of land in the vacinity of the Steel Plant. The buildings were abandoned and gradually torn down piece by piece by anyone who needed lumber.

The Hope Lumber Company had a sawmill south of Searchmont in the late 1800's. The base of the sawmill can be found at the foot of the ski hill. 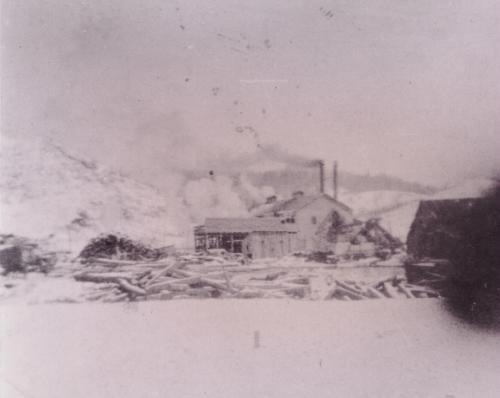 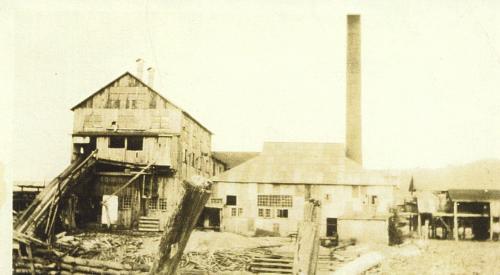 Mohawk Drilling and Exploration Company was located on highway 556, 2 miles north of Searchmont. The land was purchased from Algoma Land and Timber Company in 1971, by the company's President was Bon Idziak. The company manufactured milling and mining equipment, and employed 4 men with plans to expand.

Located where the Ski Hill is now, there was once 26 charcoal kilns. The Standard Chemical Company of Canada built them in 1928. The industry petered out after a few years.

The Lake Superior Pulp and Paper Company had built 12 houses on what was know as Laurier Street and one of the homes in the early part of the century was used as a school house. It was moved, and a new school house was built which is now the community hall.

A four-room schoolhouse was built in 1963 and students from Wabos, Glendale and Northland were brought in by bus. 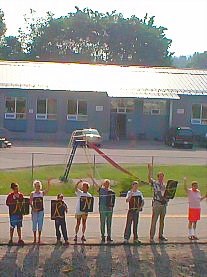 September 1981- Students of Searchmont Public School along with teacher Glen Atkinson started waving to the passenger train every morning, rain or shine with their happy smiles and signs that spelled out GOOD MORNING. The class got their first letter of thanks from a tourist in Michigan and since then the letters have been arriving steadily. The tourists send pictures, books, chocolates, cookies and even money for pop and ice cream. The morning ritual of opening and reading the many letters fills the students with happiness and a feeling of accomplishment that they have brightened some ones day with this simple gesture.

The Clergue Enterprise Company built the hotel in 1903. The purpose of the hotel was to serve passengers of the new Algoma Central and Hudson Bay Railway.

Mr. William O’Brian and Mr. Charles Edwards Keenan bought the "White House" for $2300 from the first owners the Cherrymans.

In 1906 the "White House" was sold to Peter Sundstrom a Sault Ste. Marie business man and his wife Hilda Sundstrom for $4900.

The Lake Superior Paper Company always had a doctor in attendance at the hotel in the early days. Therefore the right hand corner room upstairs, in the front was always called the Dr.’s Room. The Sundstroms painted the house in the early 1940’s. and the family owned the hotel for 50 years. 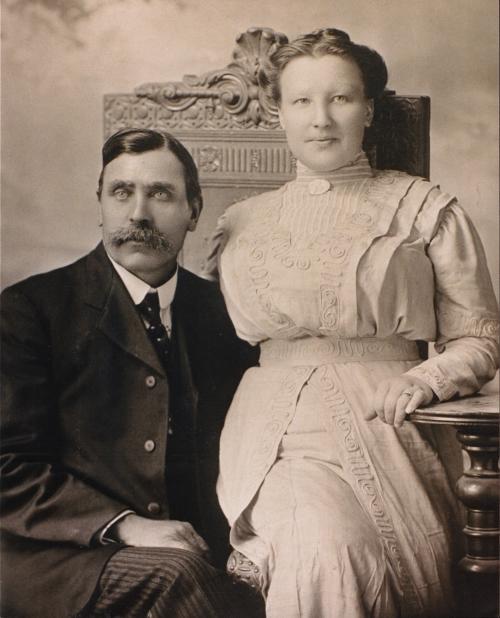 *above are hotel owners Peter and Hilda Sundstrom

The Grahams bought the hotel in 1956, they renovated by adding water, heat, electricity, and indoor plumbing but retained the semi-pioneer appearance inside and out. The hotel was destroyed by fire on October 31, 1973 and was never re-built. 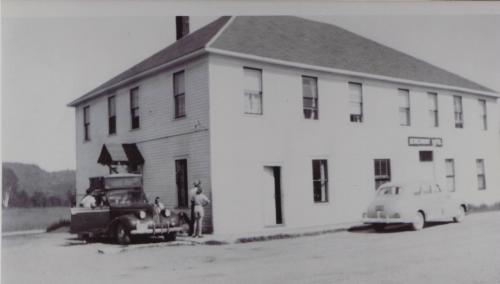 The department of highways finally constructed a bridge across the Goulias River. Up until then anyone wishing to cross the river had to use the train bridge but the residents were reminded once a year by an A.C.R. representative that they were trespassing on company property.

LET THERE BE LIGHT!

After 2 long years of waiting and anticipating, the electricity was finally turned on February 23 1962. The power was hooked up to 58 out of the 120 homes and 3 businesses, more homes will be hooked up throughout the year.

-SEARCHMONT LEARNS THE DUTY OF L.S.B.-

The L.S.B. could be of assistance in areas such as water supply, fire protection, sewage systems, garbage collection, street lighting or additional services. The board is to consist of 3-5 people with only the secretary/treasurer receiving pay. The provincial government will also recognize the L.S.B for grant purposes and funds raised within the community will be matched by the Ministry of Northern Affairs.

The Searchmont Volunteer Fire Brigade was founded in 1976 with the help of a $15 000 grant from the Isolated Community Assistance Fund and an additional $8 000 raised by the community itself. The money went toward the purchase of a new pumper truck, 2 portable fire pumps, protection clothing and breathing apparatus. The equipment was kept at the Wellwood mill with the hopes of building a new fire station at the corner of Whitman Dam Road and Highway 532.

Below is a photo of the old fire station building in 2013 after it was converted to a Trading Post.  Notice the three bay doors, one white and two other with murals on them that used to house the fire trucks. 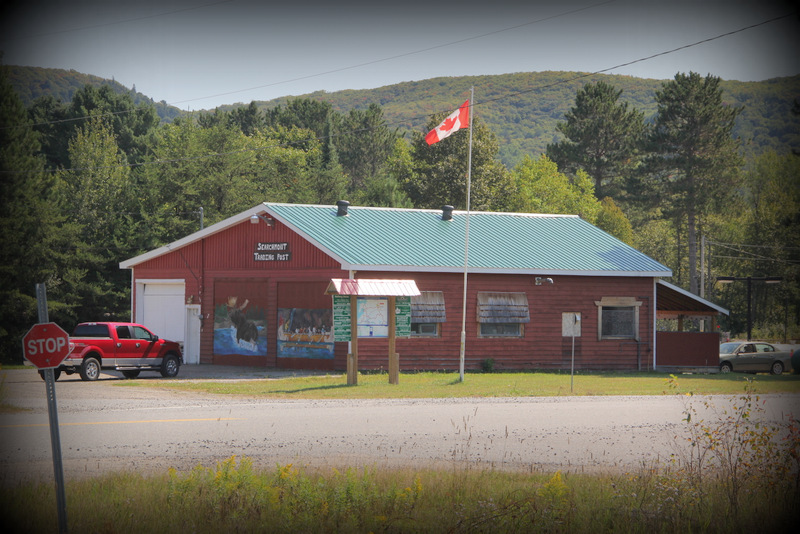 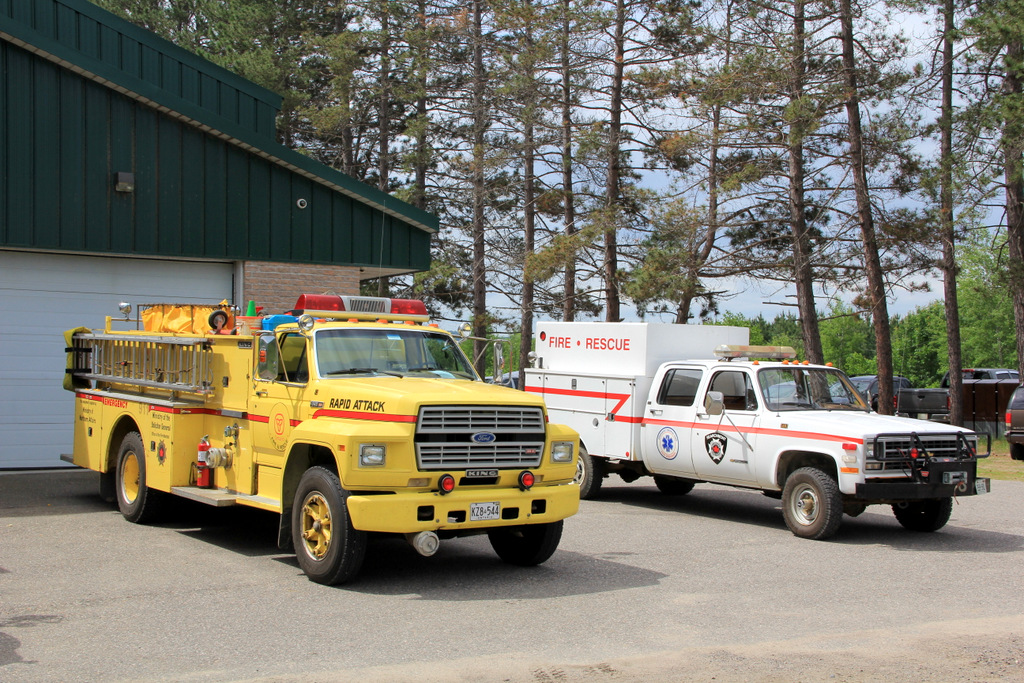 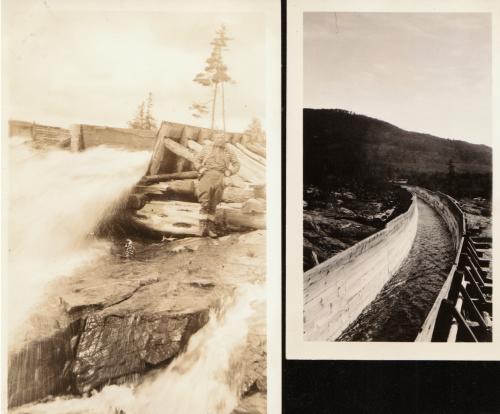 *above and below are pictures of the Whitman Dam in 1907 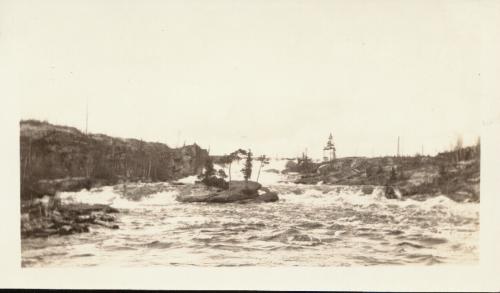 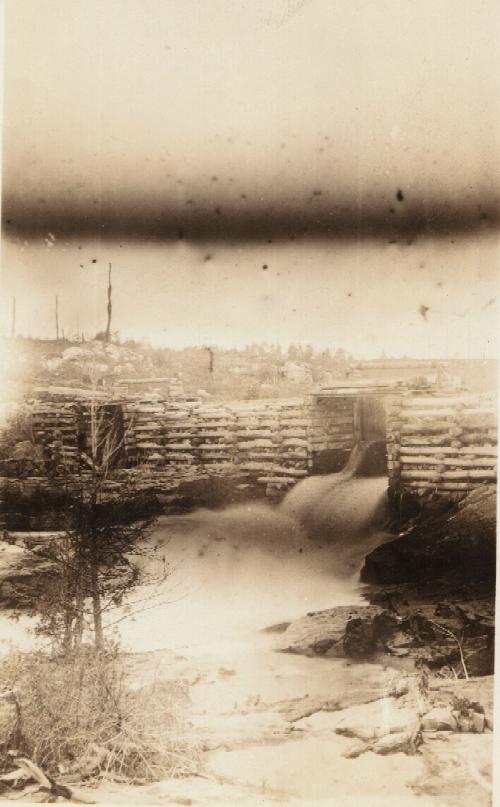 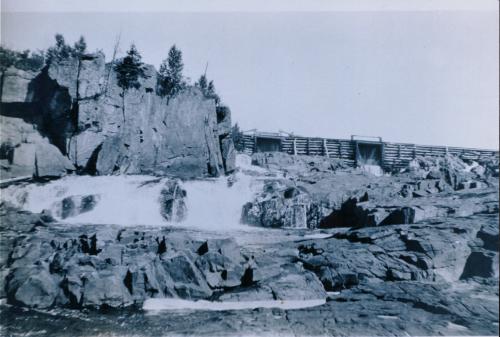 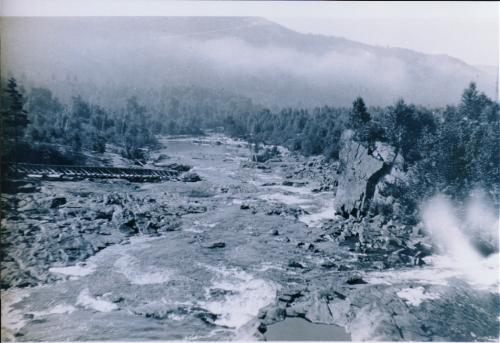 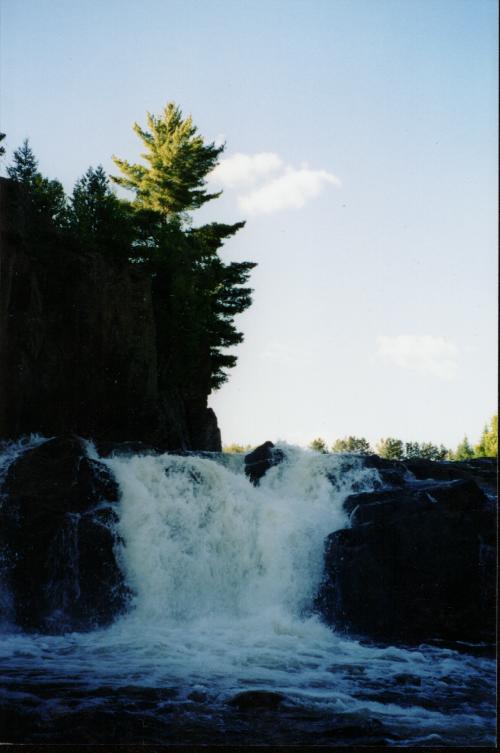 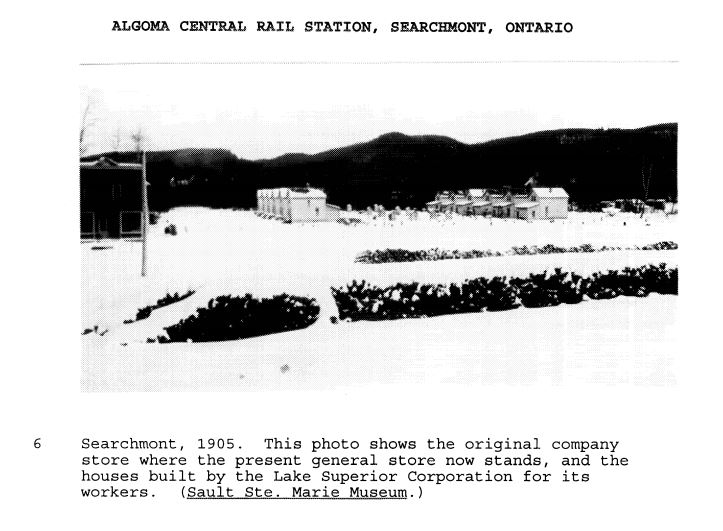 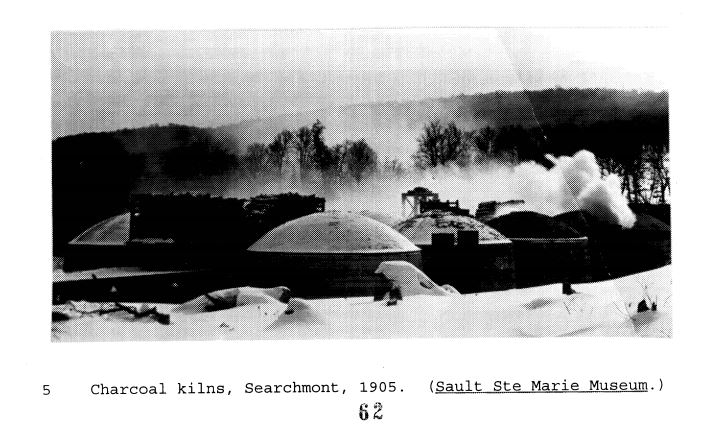 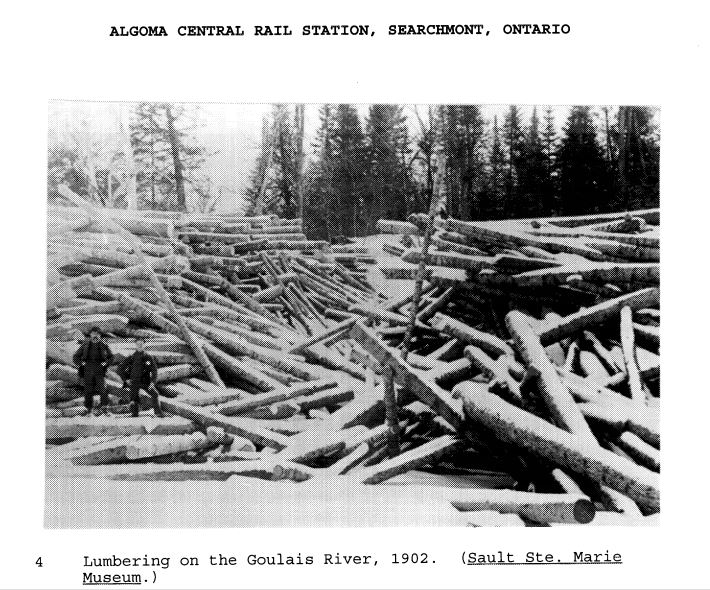